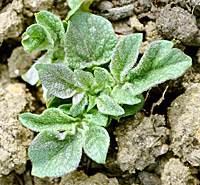 The time when – traditionally – you start work in earnest. Plant spuds on Good Friday, really get to grips with things.

Weather: I heard that chit-of-a-girl on the news on Easter Thursday; she prattled on for a full ten minutes, all of which could have been précised in one sentence of three words, 'lousy until Tuesday', and for once she was spot on.

Weight; no Easter eggs or chocolates received, so I remain hopeful

I didn't actually visit the plot per-se, as it was either raining; or just had been; or was about to. I stayed home and did things in the potting shed instead.

Or at least what used to be my potting shed before it turned into a skip. Time for a jolly old clear out! I emptied one bench top and began bringing in all the plants from my mini greenhouses (more of which later). Some had died; some had lived and some had been superseded by something else entirely which may/may not turn out to be a weed. It's not that I don't label things; it's just that the writing on the label had gone; bleached out apart from the bit that was sunk under the surface of the soil. So I had a flourishing ....anium and a dead ......uckle. Well that has to be Honeysuckle surely. There were about 10 of those in various stages of senility. Why I propagate things I don't want, I shall never understand; maybe it's simply because they will take root and I feel horticulturally blessed. And on it went; ...onium, ....opteris....rantia: but these are only flowers; I have moved on since then, progressed to the hard stuff – vegetables.

I sought and found seeds; years old and probably barren (or whatever the plant equivalent expression is), but having watched Gardeners' World recently and seen the pretty-young-one planting dried peas – the sort you steep for hours, cook for hours, and then spit out because they taste disgusting – I thought I would save a packet by not buying one. Runner beans are good for indoor sewing, and I had been saving the insides of kitchen paper rolls and toilet rolls all winter so had amassed an avalanche of them on the top shelf. I stood half–a-dozen of them in a box and filled them with compost then swept up where one toppled over, and tied the bundle together with string: well, I say 'string' actually it was a tight – if that's what you call half a pair of tights. Into these tubes I pressed three beans each and popped the lot onto a sunny windowsill. Geoff Hamilton used to favour a sunny windowsill, as did Alan-nice-big-smile-Titchmarsh until my mother shouted at one of them on the telly 'how bloody long do you think my windowsill is yer daft lad?!' I always think of her when the cat knocks my plants onto the floor in the middle of a particularly lengthy stretch.

Half an hour later - thoroughly pleased with myself and the array of freshly planted seed tubes - I dug out my electrically heated propagator and popped them inside it. Then I tried the lid on and found that it rested neatly on top of the cardboard tubes allowing absolutely no room for my sweet little green shoots to grow. That first tender shoot would pop its little head above the soil-line, blink in the daylight and brain itself on the lid. Things were not going according to plan.

I said I would tell you more about the mini-greenhouses. I suppose they were technically cold-frames; a friend and I each bought one for £3 at the closing down sale at Woolworths. About a yard square and two feet high and covered with a polythene tailored raincoat with not one but two zips, mine was immediately erected and stuffed full of stuff: hers never left the box. Eventually after repeated hints she gave me hers and my capacity doubled. One hard winter later the polythene began to come from together, and split into ribbons. Hubby-with-a-toolkit attempted to mend them with duct tape, but so much had to be used that the resulting edifice could have done duty as a photographer's dark-room, such was the totality of the light-excluding tape. I chucked the covers: I did think about taking them back to the shop but it had now turned into an amusement arcade – Woollies having gone to the great retail park in the sky. I shall cover the frames with half-inch netting and use them as protection from pigeons, deer, rabbits and out-size slugs. I shall report on this when I have faced doing the job. I then fished the old covers out of the wheelie bin to salvage the zips.
What the hell do I want with four, five-foot long, semi-bleached-out bottle green zips?