Weather warm-ish; breezy; rain threatened (or promised, depending on your attitude)

Cigarettes nil; today was Rotovator day, so a blue haze of smoke hung over the field and the smell of fresh wet petrol from a disobedient engine permeated my clothes and hair – nice!

Weight –a bit less – but only ounces! And most of it water.

Saturday morning and no one else there! And I thought I would be the least active allotmenteer. Some of the other plots appeared to have been dug from end to end, and were sitting waiting for seeds to be sewn; she-who-hasn't-lifted-a-finger-yet's plot remains horticultulus intacta, and my co-plotee was still no further forrad. I had brought back-up today in the shape of husband-with-nothing-else-to-do (apart from watching the grand prix qualifying, and that's about as interesting as watching Tiger Woods wash his balls in advance of the Ryder Cup). I thought I would make it easy for hubby by allowing him to re-dig the first of my 8 plots that I had dug over thoroughly last week – break him in gently. 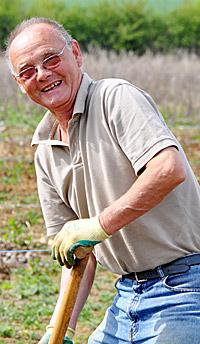 I decided that the many stones and boulders in the soil were best removed and put on the side of the beds where the paths will eventually be; but by the time bed one was finished it resembled the groundwork for a swimming pool surrounded by a replica Hadrian's wall. I continued with the systematic eviction of white-grubs-with-orange-heads still not knowing whether they were friend or foe. This time I was doing the honourable thing and keeping them within the confines of my own plot – just in case. During the week, I had spent a quiet evening on the computer trying to find out where these beasties' loyalties lay, but only found three types of websites – all unhelpful. The first site described the damage done to plants by various wee pesties, the second told me what noxious chemicals to use to rid my plot of them and the third website just advised me that there were dozens (nay hundreds) of grubs, larvae and beetle-babies, all of whom looked virtually the same. No help there then. So, as I found each one, I flicked it onto the part of the plot where bed eight will be, so they should have grown old gracefully and moved on by about three generations by the time I get there.

Mrs. baby-in-her-wheelbarrow turned up with three more offspring in tow, and a hubby with Rotovator no.1. There is something about the sound of an engine that won't start that strikes fear into my heart; how long before the operator loses his rag and hurls the thing into the ditch? And more unbearable is the thought that hubby (working really well, and hardly even sweating) will down tools and wander over with a casual, 'are you alright mate?' That question usually precedes an hour and a half of the oily rag and head-shaking ritual that chaps so love to bond over. Mercifully it spat into life and began mincing the weeds. At least it was a decently meaty piece of kit and actually turned the soil over a bit; Rotovator no. 2 now being used on a plot further up-wind resembled nothing more than an attachment for a Kenwood Chef. It bounced over the top of the soil with glee, dragging its operator in its wake.

I returned to my work thinking of the pictures I had seen of other allotments, and wondering how long it would be before we had gaily painted sheds, picket fences, flowers, herbs and bountiful produce fit to bust. Oh, the parties we could have in the late summer evenings, barbecues and get-togethers, sing-a-longs and boozy gatherings, frying our produce over primus stoves, and entertaining the residents of the Old Folks' Home opposite. I looked up and surveyed the scene before me; it looked like nothing more than a manky old weedy field. What am I saying? It is a manky old weedy field.

And then it began to rain.

Hubby favoured a return to the car for a sit-down (not trusting his rivets on the mended garden chair) and so I stood up to join him. I inspected his work; quite how he had managed it, I don't know, but he had the most humongous pile of weed roots in his bucket from the bed that I had worked over so thoroughly the previous week. This isn't what the text books mean when they talk about double digging, and I figure that my previous estimate of how long all this is going to take needs revision.

To the power of ten.