The intriguing timber staircase in the tower at Forncett St Peter

A staircase is not usually a particularly interesting element of a church building. Church staircases are indeed rarely exciting, but even if they are this is simply not a feature we would notice. This is exactly what has happened to the extraordinary and incredibly rare staircase in the late 11th-century round tower at Forncett St Peter (Figure 1).

The church is considered outstanding for a number of reasons, but the staircase is not one of them. For example, Pevsner, Mortlock and Bryant – three of the most authoritative authors who have written about Norfolk churches – do not mention the staircase in the tower at all.[1] Ironically, Bryant’s account goes into great detail describing the bells, their weight and even the value of clappers, but does not mention how one gets to those bells.[2]

This staircase has been almost completely overlooked, and yet, its presence and construction are intriguing. According to the Round Tower Churches Society, there are 131 round tower churches in Norfolk.[3] Each of these towers needs to be accessible for the purposes of maintenance and servicing of the bells, but only in one – at Forncett – is the means of access so notable. The staircase goes all the way up the height of the first stage of the tower, is wooden and consists of a solid balustrade (Figure 2) and solid baulk treads (Figure 3) supported on two pairs of strings, which follow the curve of the wall.[4] 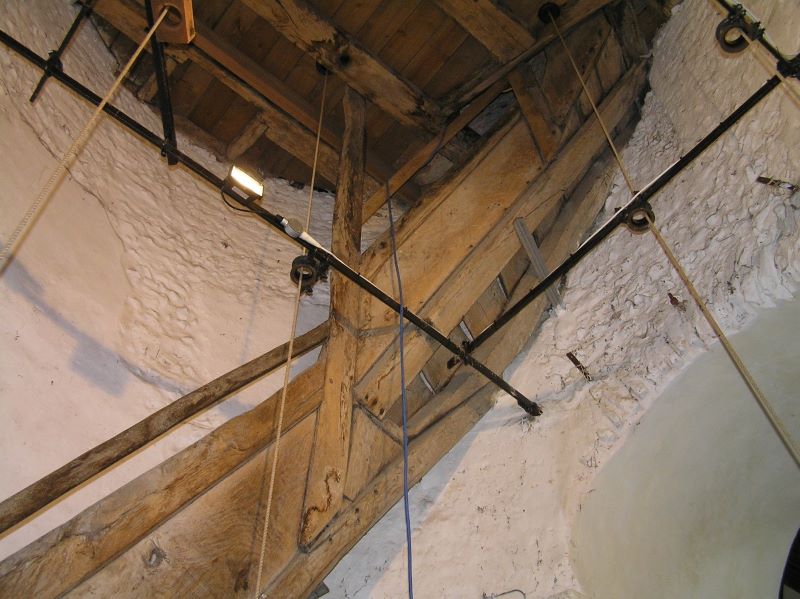 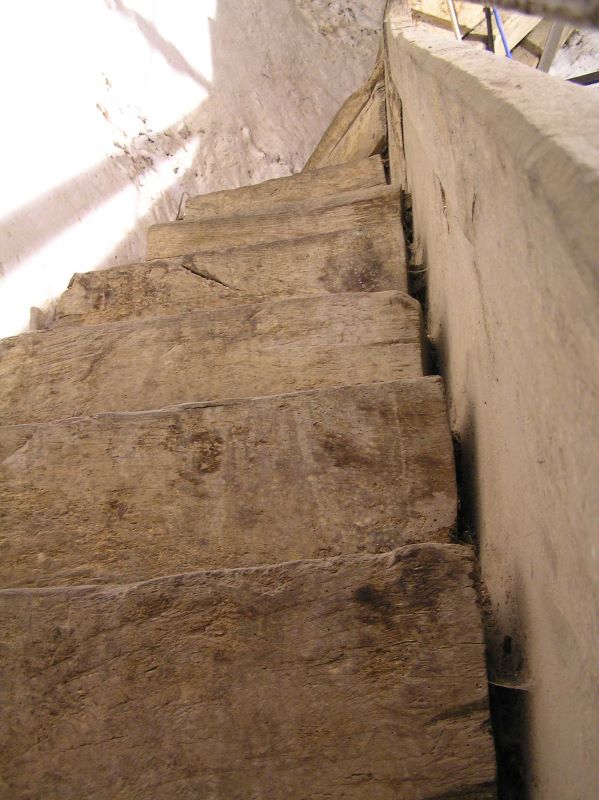 There is a doorway (with a later graffiti on it!) at the foot, probably for security (Figure 4). Considering how little room there is in the tower, the designers and builders of this staircase have demonstrated great care for convenience of access and have used the space wisely. 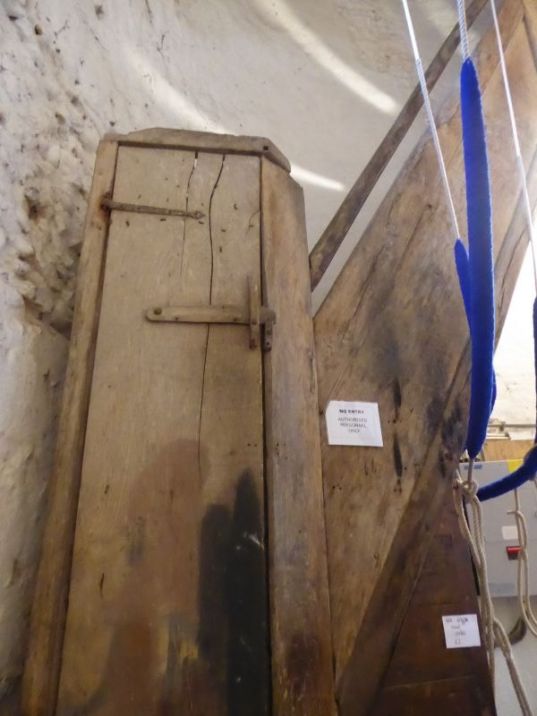 4. The staircase door. Photo: A Moskvina

By comparison, other round tower churches have either conventional external stair turrets, such as the one at St Edmund Acle (Figure 5), or slightly awkward vertical ladders fixed to the walls internally, which is the arrangement at, for example, St Peter and Paul Tuttington (Figure 6) and All Saints Poringland. A particularly interesting case is found at All Saints Kettlestone where, following the stair turret being blocked in the 19th century, there is no access to the upper levels of the tower at all![5]

The arrangement at Forncett is later than the tower itself, and it is likely that the staircase dates to the late medieval period. The rare timber staircases found at St Mary’s Brabourne in Kent (Figures 7) and St Michael and All Angels in Bishop’s Cleeve in Gloucestershire  (Figure 8) are the only known close comparisons in Britain. These were equally unnoticed: Simon Jenkins has included both churches in his ‘Thousand Best Churches’ but has not mentioned the staircases. Both are thought to be medieval.[6] Unfortunately, an attempt at dendrochronological dating of the Forncett example has been inconclusive, so we don’t know the accurate age of this staircase. Stephen Heywood, who has researched the tower, thinks this staircase is likely to date to the end of the Middle Ages or possibly a little later, to the 16th century. The staircase leads up to the doorway in the first floor, which was originally used to gain access to the nave roof before the aisles were added.[7] Considering the fact that the stair does not quite match the level of this doorway and meets the blocked opening half-way up, this may mean that the staircase was constructed after the doorway fell out of use. Interestingly, the two top steps are fixed into the mortar in the area of the blocked doorway, unlike all other steps that barely touch the wall (Figure 10), which suggests that construction of these steps happened at the same time as the doorway being blocked. If we were to (reasonably) assume that this happened when the aisles were added, we can conclude that the staircase dates to a period after 1459 – the date by which the aisles are said to have been in existence.[8] This is of course hypothetical, and there is another possibility that the top portion of the staircase was just altered when the aisles were constructed, in which case the rest of the structure may have been in existence before 1459.

Only a little light can be shed on this amazing staircase and its possible equivalents in this very brief article. Furthermore, due to the shortage of records and sources it is likely to remain under-researched. However, one of the most fascinating things anyone can do is to make arrangements to see it in real life. The tower is usually locked for security reasons, but we are planning a series of open days, so watch this space!

[4] These observations have been recorded by Stephen Heywood. – Heywood, S. 2006. The Round Tower of the Church of Forncett St Peter. Heritage and Landscape Section, Norfolk County Council, p. 10.