In the Foosteps of ...a Victorian Wood Carver

Work on St. Peter's in the Victorian Age

(Fictional Forncett characters and St. Peter's through the Ages)

Francis carefully laid his pin-awl on the scored wooden workbench, next to the leather case which shielded the rest of his tools, and made his way out of the dim church into the bright noon sunlight, swigging water from a bottle that he had stored in the cool darkness of the chancel. It took his eyes a moment to adjust to the glare, but as they did so he could see the dark smudge of what must be the down-train as it steamed towards London on the other side of the meadows. "Bang on time," he thought, as he sat down with his back against the stone of the church and felt the stored warmth of the morning beginning to seep through the cloth, easing the stiffness of his back. He'd been bent over a pew-end carving for the past two hours, trying to repair the wanton damage done to the finely carved medieval figurines, inflicted by Cromwell's men.   Re-etching 'Lust', restoring 'Avarice'. "Perhaps," he thought, "if the weather holds fine and light stays good, I might finish the Seven Deadly Sins by the week's end. If I'm lucky , that is" 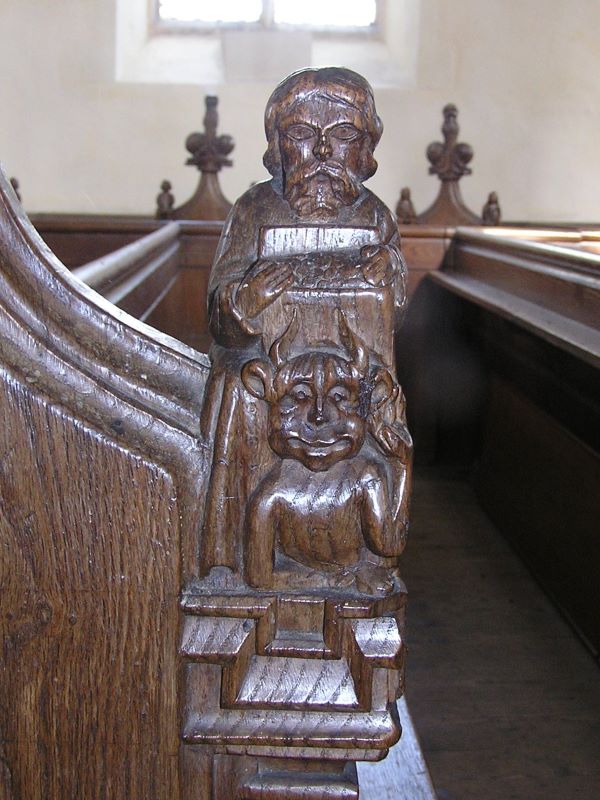 The restorer had a curious sense of his own dislocation; out here, he lived in the modern world of the nineteenth century; in there, beneath the tower, as he hunched over a carving, scraping deep new lines into ancient timbers, retouching allegorical figures long lost to memory, half-obliterated by the religious wars of England's past, he knew it could be any time at all. He had been warned against taking up the slow methodical trade. "Why look to the past?" his father had asked when he announced his plan to take it up. "You've had a good education. You could teach. Why dirty your hands with church-dust?" But if he didn't take care of the past, who would?

The last puffball of steam melted into the air as the train vanished behind the trees. He stood up and stretched his back. It felt better. He felt better: restored by the break, refreshed by the water he'd drunk. He felt the stiffened timber dust in the lines of his knuckles crack as he gripped hold of his awl, and began, once again, to retrace the dim lines of Forncett's history.