Did you know that St Peter’s has two war graves and that someone looks after them every six months?  Elaine Tibbit tells us about her role.

"Hi, my name is Elaine and I am a volunteer with the CWGC (Commonwealth War Graves Commission).  The Commission was established by Royal Charter in 1917 as the sole organisation charged with the commemoration of Commonwealth service men and women who died in the First World War (this remit was later extended to cover the Second World War).  Today, the Commission maintains the graves or commemorations of over 1.7 million of such fallen service personnel worldwide, including more than 165,000 war graves at over 12,000 locations in the UK.  I have been a volunteer since the beginning of 2021 and work for a project that has been funded by Annington Homes, called Eyes On, Hands On (EOHO).  The project is very new and was set up to assist the Commission in inspecting and reporting on the condition of scattered war graves.  There are thousands of CWGC graves scattered throughout the UK, primarily in local churchyards.  Many of these sites have a single or small cluster of graves, these are called 'scattered graves'.  Until the project was started these scattered graves were only inspected on a rolling basis every 2 - 5 years, the EOHO project helps ensure the graves are inspected more frequently and where needed, receive attention. 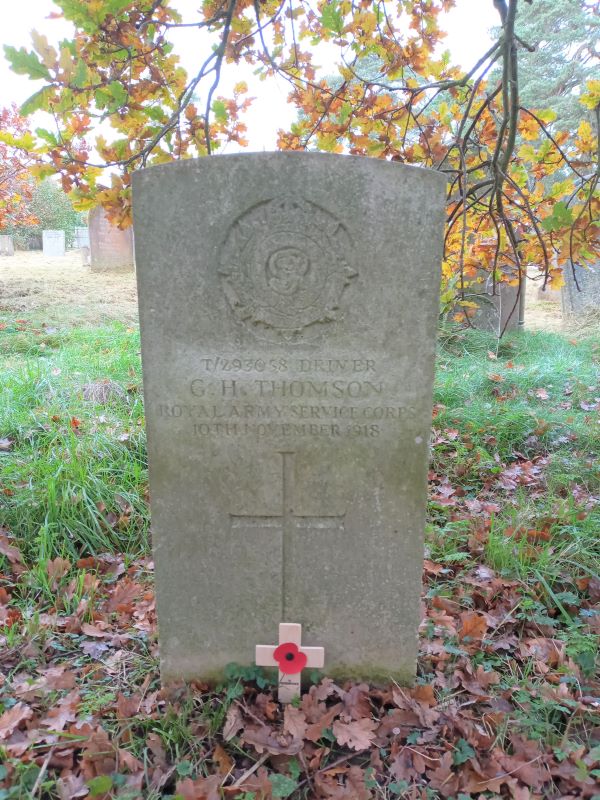 Approximately every 6 months I will inspect your two CWGC graves, Flight Sergeant Roy Arthur Tann (1943) and Driver George Henry Thomson (1918).  I take a photograph and write a report on the condition of the headstone and the surrounding vegetation as some may need to be trimmed in order to see the casualty’s headstone clearly.  I look after 23 casualties across 10 churchyards.  We must always remember that a lot of the headstones are over 100 years old and they will not and should not look new.  However, we do check whether the headstone needs cleaning – we have to be careful we do not over clean the headstones and damage them but if they do need a clean, I have been trained how to do it. Also, if the area around the grave needs tidying, I can trim light vegetation. Sometimes an inspection can reveal damage to the headstone, my report is used to assess that damage and helps the CWGC Operations team decide what to do next. This will most likely include a second inspection by the Operations team. Where possible they try and repair the headstone – our aim is to keep as many of the original headstones as possible. However, if the damage is too great, sadly sometimes a new headstone is required. 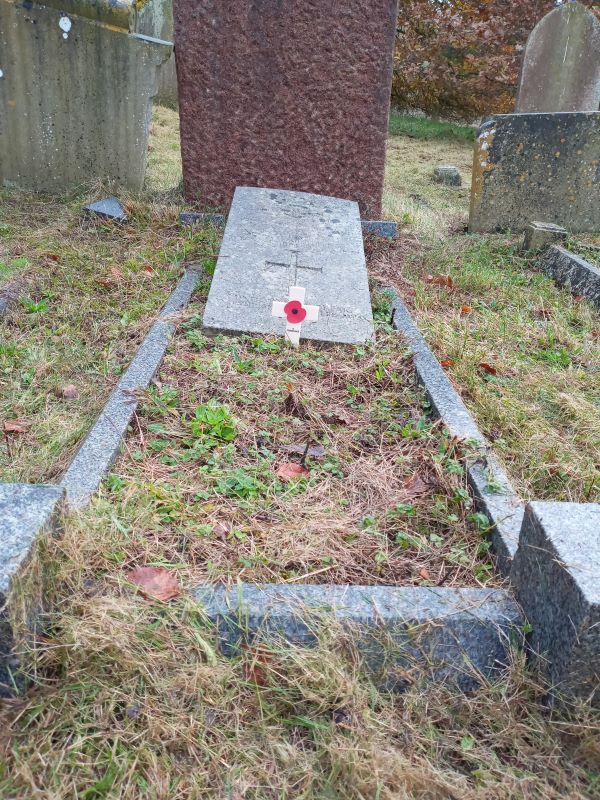 There are different types of memorials, so not every headstone is maintained by the Commission.  If the family of the casualty chose to mark their loved ones final resting place with a private memorial, all I and the commission can do is inspect to ensure that the casualty’s name is legible.  If, however, the name is not legible, the Commission will try to get authority there is a process to gain permission from cemetery authorities, the family and other interested parties to add an additional marker. This can be either a full-sized Commission headstone or a Gallipoli Marker at the grave. Every service man or woman must be remembered.

I have done a little research into the 2 casualties in your churchyard.  Unfortunately, a lot of World War 1 service records were destroyed when the record office was hit by a bomb and ensuing fire, however, I did discover that George Henry Thomson was from Kirkcudbright in Ayr. Looking in the National Archives (with help, I am still learning) we found George’s medal card. He was an early joiner – he enlisted in November 1914. We also found his service record which wasn’t destroyed by the fire. He was born in 1889 and was a farm servant. He died 4 years and 1 week after he enlisted. George was a driver with the Army Service Corps.  He passed on 10.11.18 after contracting influenza.

Flight Sergeant Roy Arthur Tann was just 23 when he died.  He was based in Melbourne, Yorkshire with 10 Squadron Bomber Command as a Navigator.  He was killed on 3.11.43 when his Halifax aircraft hit telephone lines and crashed during an emergency landing at Shipdam Airfield.  They were returning to Norfolk from an early raid on Dusseldorf.

I hope this has given you a little insight into some of the work of the CWGC.  Please take a look on their website for lots more information  CWGC"

We are tremendously grateful to CWGC and to Elaine for their work in commemorating those who gave so much.