The Bells of St Peter's Toll for Duke of Edinburgh

After 18 long months St Peter's bells were heard again with a toll to celebrate the life of the Duke of Edinburgh.

St Peter's has one of the best rings of bells in Norfolk, thought to be second only to St Peter Mancroft - they have been silent for so long due to the restriction imposed by Covid meaning that ringers could not gather in the narrow confines of the tower chamber.  On 17th April they joined in a nationwide tribute to Prince Philip.  A toll of 99 rings from a single bell rang out across Forncett.  Trevor Smith, a very experienced ringer who has rung at St Peter's many times, did the honours.  You can read more about Trevor here

There were four large bells at St. Peter’s in 1552 and the Church was one of the first in the vicinity to have as many as five bells. Clearly, change ringing was flourishing here from 1602 when the ring of five was completed by Norwich bell-founder William Brend. When the bells were rehung in 1778 the landlord of The Tuns advertised that “all gentlemen ringers that will please to make Trial of the said Bells shall meet with the kind reception by their humble servant”.

In 1875 the cracked tenor bell was recast by John Warner of Crippleton, London. By the 1930s the bells had become un-ringable. In 1938 John Taylor of Loughborough carried out a complete restoration, recasting the cracked tenor bell and rehanging the bells in a new two-tier bell frame. Between 1939 and 1988 twenty-six peals were rung – more than any other five-bell tower in the country.

A new treble bell was cast in 1982 from the cracked number two bell at Forncett St. Mary Church and hung at St. Peter’s to complete a ring of six. The work was done in memory of Mary Armstrong, a former churchwarden and headteacher of the School. The treble is inscribed as follows: “To the glory of God and in thanksgiving for the life and work of Mary Armstrong BEM 1907-1980”. The Peal Board commemorating the new ring of six by a special peal of doubles, 5040 changes, on December 17th 1983, may be seen to the left of the tower door.

Although the ring of six contains bells of five different dates (1980, 1938, 1602, 1737 and 1875), it is considered to be one of the finest in the county. The tenor bell weighs 13cwt 12lbs in the key of F. During restoration work in 1986 painted numbers were uncovered on the wall of the ringing chamber. These were probably used by eighteenth century Forncett ringers to ring Call Changes (1). 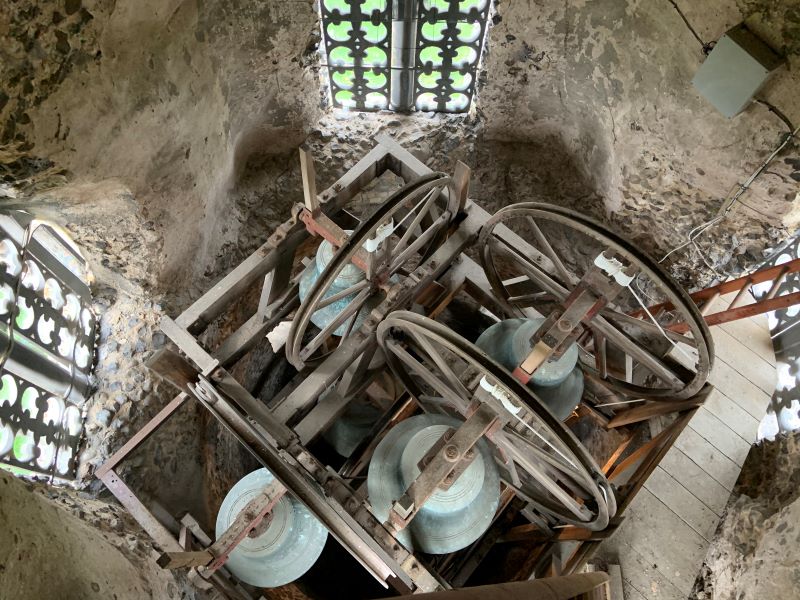 Looking down on to the bell frames. Photo: A Moskvina

When you first walk into a bell tower the bells will usually be in the down position for safety reasons. This way the bells will only swing from side to side and if someone happens to pull on one of the Sallys (the rope) there is no danger. This is also the position the bell would be in for Tolling.

When the bells are in the up position, the bell is set just over vertical and resting on what is called the Stay. When the Sally is pulled the bell will be pulled off the Stay and will swing down and round, under its own weight, virtually 360 degrees back to its original position. (What then has to be done is to not allow the bell to swing too far back the other way and hit the Stay!!).

The basics of learning to bell ring include following another bell leaving the right space. Your ears will tell you what is correct, but as a guide the person you are following must have pulled about half the length of the Sally when you begin your pull. It is important to develop a smooth regular pull so you can feel the rhythm.

There are many different methods of bell ringing. Methods are generally referred to by an official name assigned to them by The Central Council of Church Bell Ringers. Such names have three different parts – the method’s name proper, its class and its stage. The name proper is the method’s personal name, e.g. Plain Bob.

As a learner you will start ringing Rounds (controlling the bell) and then move onto ringing Call Changes (each call swaps over an adjacent pair of bells). As you advance there are other basic methods the most recognised including Plain Hunt, Grandsire, Plain Bob as well as ringing Peals. A Full Peal can consist of up to 5,040 changes and can include various methods and lasts approximately 3 hours. Any bell can also be Tolled for funerals, memorial services, etc. For example, I tolled the bell for the passing and funeral of Prince Philip, Duke of Edinburgh at St. Peter’s in 2021.

Bell ringing is also known as Campanology and a bell ringer is called a Campanologist.