Cigarettes nil (not all that surprising because I don't smoke, but felt I should mention it as a sort of homage to Bridget Jones.)

Weight – let's talk about that later.

Hours worked; about two, and I intend to be honest about that – honestly!

The allotment field is a mess: there is no getting away from it, and anyway my pride won't let me. I am 62, overweight, unfit and genetically lazy. I cannot tie my shoelaces with any dignity, and once I am on my knees I can't get up.

So this is how it starts.

The field has been ploughed, and re-ploughed, but as each of the two operations were some years apart, all it succeeded in doing was chopping the weeds' roots up into hundreds of pieces and burying them at just the right depth to ensure rapid regrowth. They duly re-grew. Then they had been left to go to seed, and the seeds had flown. The only visible sign that marked my plot out from the other dozen on the field was some unnaturally bright blue string attached to four bits of cane about four feet above the ground - and about three inches above the tops of the weeds. 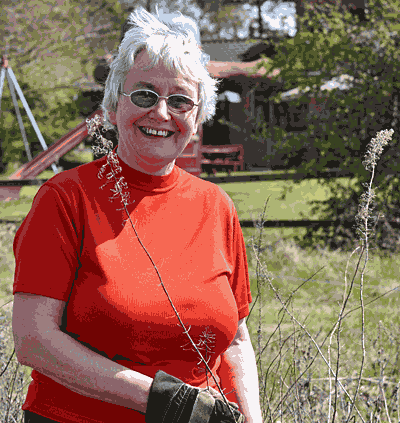 One of the other allotmenteers

I say 'allotment' but I only had enough courage enough to tackle half a regular sized plot, so a fellow geriatric digger and I are sharing one. We both measured the half-way mark, and re-measured to be sure: then a husband-to-two checked our accuracy until common sense overtook us and we agreed that a couple of inches here or there were not going to make much difference. Armed with a plastic garden chair (mended with rivets where it broke one summer and nipped my back in the process); a big black rubber trug; some water to sip when I felt faint; and a few garden tools, I set to. I say 'a few' garden tools: actually there were quite a number. My very new shiny lady-spade, complete with little plastic cover for the blade (ahh!) and some advertising literature (presumably to tell me how to get it started and where the brakes are) attached to the handle with a lady-proof, un-rip-able plastic tie. That should guarantee blisters! Also - rather premature but I do love the look of it - a brand new dibber (£3.99) for making holes to put onion setts in. and before you 'tut' at the extravagance, I will say in my defence that if you push an onion sett in, the soil beneath is compressed and will eventually swell back, popping the dear little onion up out of the ground, much to its surprise, and rendering it only too visible to the blackbirds who delight in hoiking them all out. Also it stresses the body of the onion being forced in like that.

I had brought my kneeler, so I lowered myself down and began. There were other plot-holders around; some were allotment-virgins like me; some were even new to the sound of spade hitting rock; and then there were the old hands. Time will tell, but I suspect we all have our own way of doing things.

I like to leave the weeds where they are until I can give them my attention; if you chop the tops off the effect is better, but the roots are still there, and they don't give up easy. There were roots like fat worms that twist and coil and break like glass; down into the deep-delvéd earth (is that a poem?) under stones, behind rocks and through the fibrous roots of other weeds. Rose-bay willow herb, thistle and dandelion; couch grass and plantain and black medic: each with its own itinerary of subterranean business. And it is my job to put an end to this underground mayhem; to bring order and bounty, abundance and profusion.

But I am getting ahead of myself: two-and-a-bit hours later I had cleared about two square yards of earth. My plan is to have eight beds, each about five feet across so that I can reach my produce from a kneeling position, and about six yards long, with a gap between so that I don't have to hop. At this rate it should take me about .... er ...eight threes are 24, times two-and-a-half, divided by seven is ....