We are delighted to report an excellent fête appropriately celebrating the new roof. Rather changeable weather on the Friday gave way to breezy conditions on the day and lots of sunshine to encourage a steady stream of visitors throughout the day and a renewed impetus for the evening’s gig by ‘MODE’, led by Elliot and lead singer Jo. The group was much appreciated by the large crowd, many with families, the children cavorting and strutting to the beat of the music.

The success of the event was due to the enormous effort put in by the committee (Margaret, Barry, Dick, Jasmine, Brian and Anne, Jackie, John) and loyal helpers (Quinton, Philip, Paul and many others, including Jayne and Richard). We thank them all most warmly for their time and commitment.

Another aspect of the fête was the display of the plans for the New Project (the installation of essential services!), which aroused considerable interest. This will however only be pushed forward by establishing an official, properly constituted ‘Friends Group’, otherwise community funding will not be accessible. The display remains in the church for viewing in the immediate future if readers wish to view it. Please come and look. We also need feedback!

The major project of re-roofing the roof of the church at Forncett End is drawing to a close. Members of the Friends of St Edmund’s committee were impressed by the work carried out mainly by Gary Ludkin (seen setting in place the last ridge tile) and his assistant Neil and retired builder Barry Bradford. Additional invaluable help from some twenty volunteers – and a blessed period of fine weather - enabled the project to be completed within a short time frame and below budget.

The project was monitored by our architect, Terry Hickman-Smith, whose input and expertise has been highly valued and appreciated. The general state of the roof timbers was by and large very good; very little major repair work was required. This has enabled additional remedial work to be undertaken on the deteriorating east end – the unfinished chancel. This happened because of shortage of funds – an old story.

We are writing to all those locally who have expressed an interest or might be interested in the care of Forncett St Edmund’s church here at Forncett End.

You may well have already had a letter directed at enlisting volunteer help on our major project of re-roofing the church. Indeed, you may already have responded; for which we are most grateful. Circumstances have changed in the last week and we thought you would be interested in hearing the details. A general comment about the need to defer our intended start is appearing in the April edition of The Forncett Flyer.

We have had to suspend our intended start owing to health problems being experienced by our principal contractor, Barry Bradford, meaning that he will only be able to undertake a limited workload,  We also do not have adequate back-up of roofing expertise. 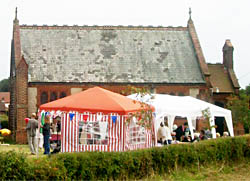 The Revd Andrew Good declared Forncett St Edmund’s very first fete open at one o’clock on 6th August to the distinctive chimes of the church’s single bell. Delicious cream teas were expertly prepared by Jasmine and Sheila and served by them and their team of lovely ladies, while ‘Frier Tuck’ (Taverham) was on station providing other refreshments. There was a very wide selection of bric-a-brac for sale, but a major attraction, as always, was the home-made cakes and provisions stall, which had completely sold out before the end of the day.

By the late nineteenth century and certainly by 1900 the increasing population of the hamlet of Forncett End with its various services - bakers, butchers, bricklayers, general stores and later a bus service to Norwich - was clearly needing both educational and spiritual support. Attempts had been made by the Parochial Church Council to set up an infant school but this fell through for lack of continuing financial donations after a few years. 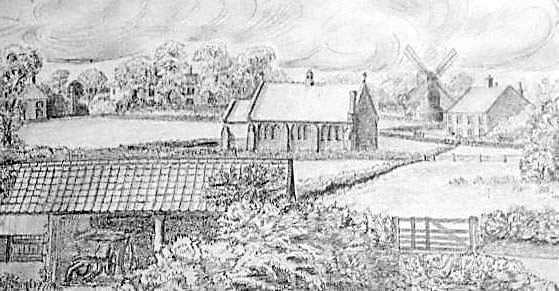 However, the grand project of establishing a daughter church met with the approval of the Bishop and had a determined organizer in the person of the Rev T.J. Bentley, the new rector of Forncett St Peter, who was supported by the venerable and much-loved aging rector of Forncett St Mary, the Rev. J.E. Cooper.

This little church was therefore built during 1903-04, at a cost of £600, as a mission church or daughter church to Forncett St. Peter. A tablet on the north wall records its consecration on St. Peter's Day, 29th June 1904.

It is a small building with a gable at each end and a small west porch with bell-cote. It is faced mainly with brick with some mortar rendered panels. The east wall is covered with weatherboarding cladding, since the chancel was not built due to lack of funds.

The pencil sketch (left) was drawn by Horace Pymer soon after the church was completed; the patent ventilator is in place but the bellcote has not yet been added. Other items of interest can be seen: the windmill, Austhorpe House (in the trees) and part of the Jolly Farmers PH.